Nelson is one step closer to having a rock climbing gym again after the first Annual General Meeting of the Kootenay Climbing Association last night. Over 75 people came out to the meeting at Selkirk’s Mary Hall, hosted by KCA, the non-profit organization that took on the task of building a new climbing gym in the city after Gravity closed its doors last Spring.

Attendees ranged from families with young children to hardcore climbers and mountaineers from all over the Kootenay region. Everyone from Mirek Hladik (the former owner of the Gravity) to Golden resident Dave Jones, author of the new Rogers Pass mountaineering guidebook, were in attendance.

Aside from choosing Directors at the meeting (local climbers Shawn Tasker, Scott Jeffery, Larry Bickerton, Ico de Zwart, Cam Shute and Nate Smith), the group also discussed the fact the City approved its proposal to use a portion of the Mary Hall gymnasium to install a climbing wall. The KCA is now negotiating with Selkirk College regarding the facility.

Currently, the group’s financials includes approximately $20,000 in 0% loans from members of the climbing community and about $100,000 is required to build the wall. Intentions to apply for grants through the Columbia Basin Trust were shared along with other fundraising ideas including a $50 “Wall Sponsorship” program and a “Founding Investor” plan. Also, new memberships, donations, investor loans and the silent auction at the event have raised a total of $4,500.

Guide and Nelson resident David Lussier was also in attendance and he presented a slideshow about his climbing history in the region, which includes numerous first ascents such as the first free ascent of Mt. Dag in the Valhallas, which he did with Alan Jones. He also discussed his adventure in Patagonia last month when he climbed Cerro Torre, one of the most visually stunning and yet technically difficult peaks in the Southern Hemisphere.

For the past four months Dave trained at the tiny bouldering cave at Selkirk College in Castlegar and on the 5-metre-high ice falls on the side of the road going up to the Whitewater Ski Resort. He then flew down to Argentina but because of the infamous weather in the Patagonia region he and his climbing partner (Canmore guide Carl Johnson) didn’t have a lot of expectations. They lucked out with a good weather window, however, and decided to attempt the 3,100-metre Cerro Torre. The approach took them two days of hiking across rivers and over glaciers and, when they reached the tower they only had a few hours rest before they began simul-climbing the lower half of the route in the dark. (The duo climbed the 1,500-metre West Face route on Cerro Torre a free line that involves rock, ice and mixed climbing skills with a rating of M4 and grade 5+ ice.)

To make the adventure even more interesting, Dave dropped one of his ice tools half way up the route and was facing the prospect of somehow trying to finish the technically demanding upper ice pitches with only one tool. Luckily, there was another climber on the tower who had soloed the route earlier in the day and was rappelling while Dave and Carl were still ascending. In a moment of extreme generosity, he loaned Dave his ice tool and Dave managed to finish the route, reaching the summit in perfectly sunny conditions.

“It was a climb of a lifetime really,” said Dave, who’s celebrating his 40th birthday this year. “We went there not expecting to climb that route but when we got the weather window we went for it and everything worked out.” Dave went on to say that having an indoor climbing gym in Nelson is integral to ensuring others enjoy similar adventures. “It’s really important for our community, our families and individual climbers to have a climbing gym in Nelson,” said Dave. “

There are four ways to become a member of the Kootenay Climbing Association:

1. Fill out a form at Valhalla Pure Outfitters on Baker Street in Nelson

2. Go to the KCA web site, print out a membership form and mail it to the address on the form 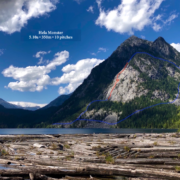