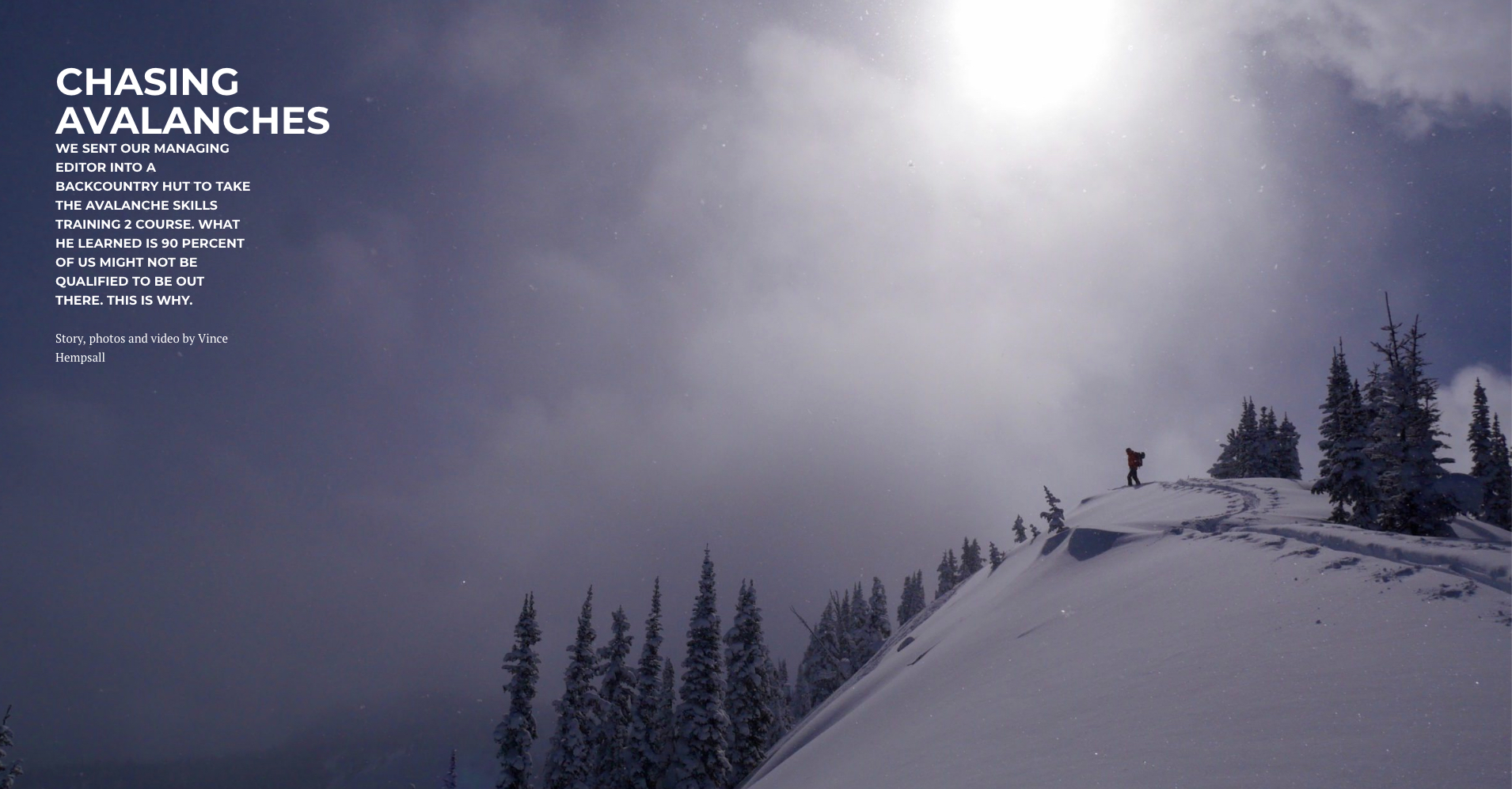 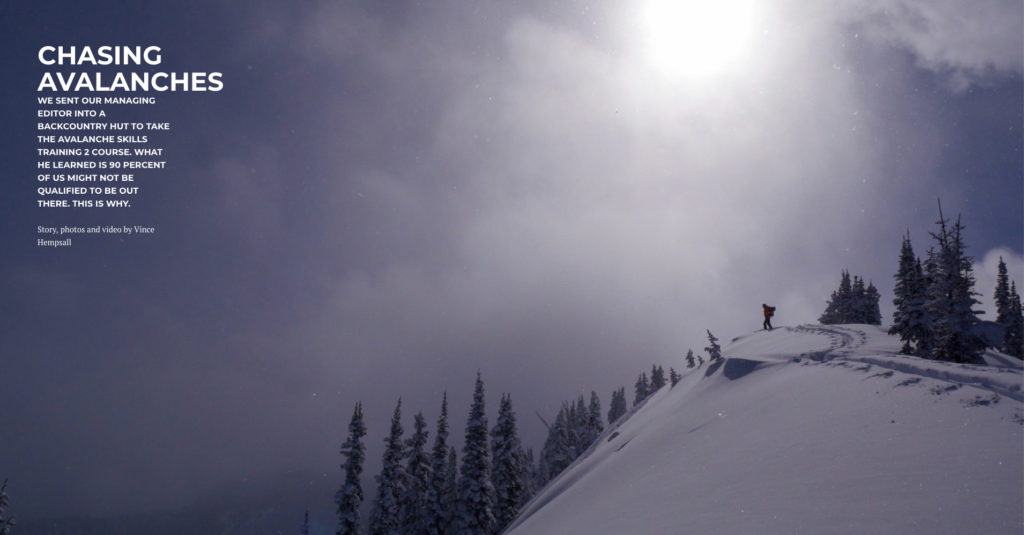 A friend of mine was caught in an avalanche three days ago but luckily managed to escape it by grabbing onto a tree. Another friend avoided being launched off a cliff a few months ago during an avalanche. He also grabbed onto a tree and saved himself. This seems to be happening with more frequency lately and I don’t know if it’s because more of us are getting into the backcountry or if we’re taking greater chances. What I do know is a lot of us aren’t qualified to be back there.

The story I did for Mountain Culture Group about my AST 2 course at the Lequereux Outpost in the Valhallas taught me that the majority of people in the backcountry don’t have their AST 2 training. Essentially they know how to use their beacon, shovel and probe and that’s it. 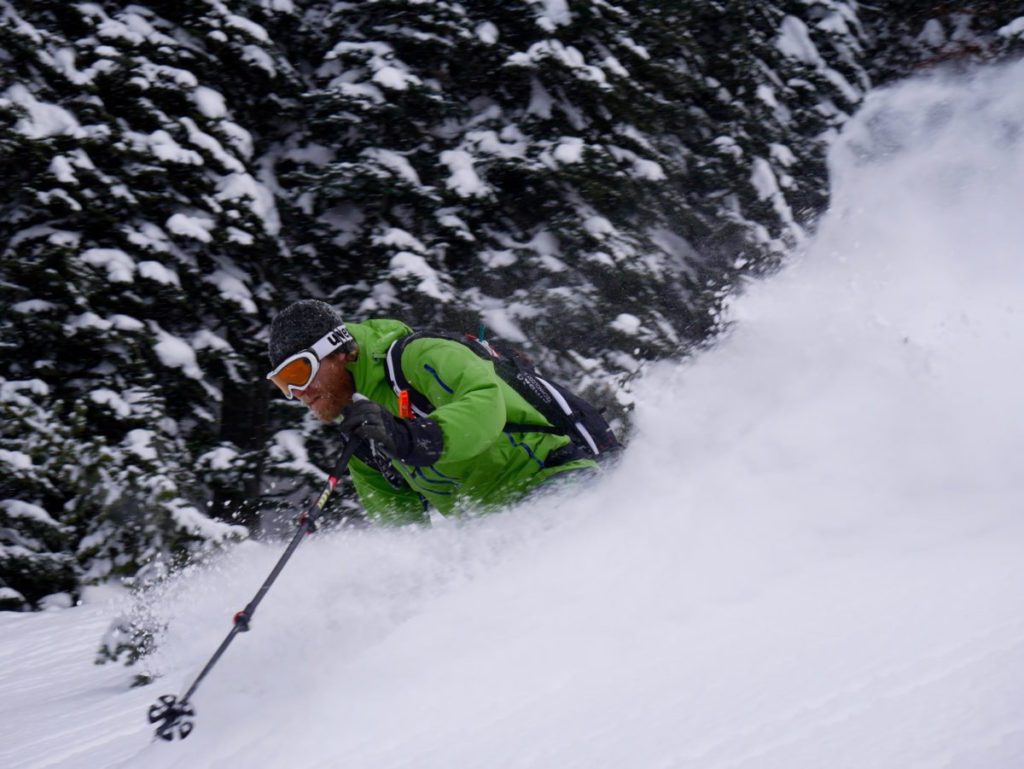 This is how my story starts:

WHEN I SAW THE CRACK splinter out from the tip of my ski like a bolt of grey lightning ripping through a perfect white canvas, I was elated. I had trained the past five days for this moment and now, finally, I had caused an avalanche.

Conditions were ripe. It had snowed about a half metre in the past week and the temperature had suddenly warmed from a constant -15°C to near zero overnight. We were being cautious but my classmate and I still wanted to see what it was like to kick off a surface slab layer. We chose a 30-metre-high steep convex roll with a well-defined escape route and a wide runout path that was clear of any trees or obstacles. I made sure he had his eyes on me and then dropped in, ski cutting the top of the slope. Within seconds a 20-centimetre-deep slab sheared off under my downhill ski and shot left while I escaped right to safe terrain. The crown made a perfect heart-shaped pattern down and around an exposed rock for 20 metres and the debris ran for 25 metres. I turned back from the safe zone to look at my handiwork and then whooped with happiness.

In most backcountry scenarios, causing an avalanche is something you want to avoid. In this case, however, I was nearing the end of an Avalanche Skills Training Level Two course and, because we were filled with knowledge and had monitored the conditions religiously, we wanted to experience practical application of the lessons we had learned.

To read the article in its entirety, and see the corresponding photos and video, visit: mountainculturegroup.com/avalanche-skills-training-2-backcountry-hut.

Review of the RAB Neutrino 200 Down Sleeping Bag